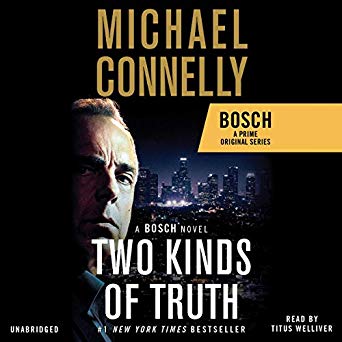 I just have to start by saying that after listening to this book, I have a total crush on Titus Welliver’s voice. I’m not sure what I ever thought Harry’s voice would sound like, but this is definitely it. So, “Two Kinds of Truth” is book 20 of 20 in the Harry Bosch series. I try as often as possible to read a series in order but for some reason, with Harry, I always end up with with a book at a different part of the series than the one before. Harry is no longer working for LAPD but instead is in San Fernando helping out with their murder squad, when he is called to the scene of a pharmacy where the father and son pharmacists have both been shot. Initially, the suspicion is that it may be gang related but it quickly becomes obvious that this is no ordinary gang killing. Soon, Harry finds his life on the line as he hunts for this ruthless killer.

Ahh, Harry Bosch. He’s like a favorite uncle for me. You know, the one with all the dangerous, exciting stories to tell. That’s the feeling I get whenever I pick up a book in this series. His former partner from earlier in the series makes a return visit in this story which makes for nice continuity. I also really enjoyed installments where Harry’s daughter makes an appearance. Some detectives are just meant to have a daughter and Harry is one of them. I really enjoy their relationship. This story has some tricky twists and a lawsuit against Harry as a sub-plot which adds to the drama. Basically, there is nothing I didn’t like about this book and if you haven’t discovered Harry Bosch yet…what are you waiting for?