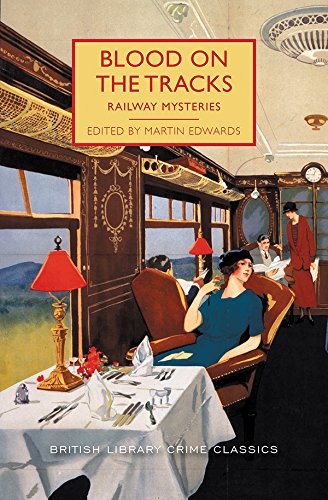 A signalman is found dead by a railway tunnel. A man identifies his wife as a victim of murder on the underground. Two passengers mysteriously disappear between stations, leaving behind a dead body.

Trains have been a favourite setting of many crime writers, providing the mobile equivalent of the “locked-room” scenario. Their enclosed carriages with a limited number of suspects lend themselves to seemingly impossible crimes. In an era of cancellations and delays, alibis reliant upon a timely train service no longer ring true, yet the railway detective has enjoyed a resurgence of popularity in the twenty-first century.

Both train buffs and crime fans will delight in this selection of fifteen railway-themed mysteries, featuring some of the most popular authors of their day alongside less familiar names. This is a collection to beguile even the most wearisome commuter.

This collection of short stories was such a delightful read I could hardly put it down. Some of the authors were names I recognized while most were completely new to me. There were only a couple of stories that didn’t fully capture my attention. All of the stories have something to do with trains. A couple of them were spooky but all of them really exemplified the Golden Age of Mystery. Both male and female detectives are represented across the stories. Several of the stories have a “locked-room” feel to them. I just really enjoyed this collection and I highly recommend it.