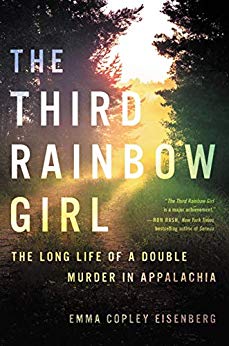 The Long Life of a Double Murder in Appalachia

In the early evening of June 25, 1980 in Pocahontas County, West Virginia, two middle-class outsiders named Vicki Durian, 26, and Nancy Santomero, 19, were murdered in an isolated clearing. They were hitchhiking to a festival known as the Rainbow Gathering but never arrived. For thirteen years, no one was prosecuted for the “Rainbow Murders,” though deep suspicion was cast on a succession of local residents in the community, depicted as poor, dangerous, and backward. In 1993, a local farmer was convicted, only to be released when a known serial killer and diagnosed schizophrenic named Joseph Paul Franklin claimed responsibility. With the passage of time, as the truth seemed to slip away, the investigation itself caused its own traumas-turning neighbor against neighbor and confirming a fear of the violence outsiders have done to this region for centuries.

Emma Copley Eisenberg spent years living in Pocahontas and re-investigating these brutal acts. Using the past and the present, she shows how this mysterious act of violence has loomed over all those affected for generations, shaping their fears, fates, and the stories they tell about themselves. In The Third Rainbow Girl, Eisenberg follows the threads of this crime through the complex history of Appalachia, forming a searing and wide-ranging portrait of America-its divisions of gender and class, and of its violence.

You know I like a good true crime. Also, having grown up on the edges of a “hippie” community, I find books involving that lifestyle very intriguing. This book did not disappoint in either category. What I was not anticipating was that the author would weave her own story into the narrative of the murders. But I was not mad about it. Both the author’s life story and the story of the murdered girls were fascinating. She uses one of my favorite structures, going back and forth between the present and the past, to keep the reader’s interest.

Initially, the cops are convinced they know who murdered the girls and they bring that person to trial and get a conviction. Case closed. But is it? It seems that almost all the residents of Pocahontas County have some kind of a connection to someone involved. Suspicions are everywhere and leave the community reeling for years afterward.

In my opinion, the author has done an excellent job of investigating the murders all these years late, and of conveying the facts and the fiction of the killings to her readers. I also appreciate the way her status in the community enabled her to convey, with and inside perspective, the ways that people’s lives were impacted by this event. This book is definitely worth the read.