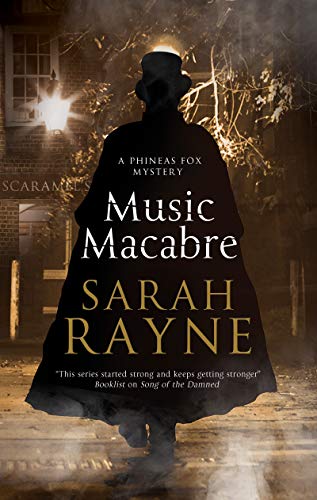 Music researcher Phineas Fox has been enjoying his latest commission, gathering background material for a biography of Franz Liszt. But although he has – as anticipated – uncovered plenty of scandal in the 19th century composer’s past, matters take a decidedly unexpected turn when his investigations lead to Linklighters, a newly-opened Soho restaurant built on the site of an old Victorian music hall, and unearth evidence of a possible murder involving the notorious music hall performer known as Scaramel.

Just what was Liszt’s connection to Scaramel … and, through her, to the infamous Victorian serial killer Jack the Ripper? As he delves further, Phin’s enquiries uncover clues to a fascinating and extraordinary story – and plunge his own life into jeopardy.

This is the 4th book in this series, but the first one I have read. I found Phineas Fox to be a delightful character. The story here I thought was very unique, with 3 different story lines taking place but they all come together in the end. I’m not sure how much of the story is historically accurate but the historical parts felt real to me. There’s a supporting cast of great characters. The movement between the 3 stories keeps you engaged in trying to figure out the mystery. There are some thrills also to keep you on the edge of your seat and a good dose of London fog to give you that little chill down the spine. This was a great read and I hope to have a chance to read more from this series.