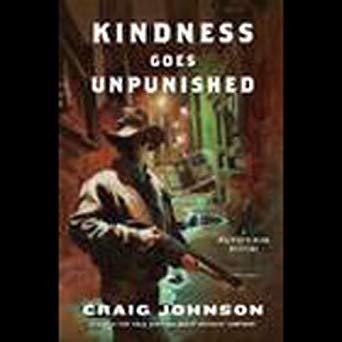 Book 3 in the Walt Longmire Series

Walt Longmire has been Sheriff of Absaroka County, Wyoming, for almost a quarter of a century, but when he joins his good friend Henry Standing Bear on a trip to the City of Brotherly Love to see his daughter, Cady, he’s in for a shock. Walt hasn’t even put his boots up when Cady is viciously attacked and left near death on the steps of the Franklin Institute. He soon discovers that she has unwittingly become involved in a deadly political cover-up. Backed by Henry, Dog, Deputy Victoria Moretti, and the entire Moretti posse of Philadelphia police officers, Walt unpacks his saddlebag of tricks to mete out some Western-style justice.

Walt Longmire and Henry Standing Bear in Philadelphia! Talk about fishes out of water. But these two will do anything for Walt’s daughter Cady, including tracking down the bad guys who put Cady in the hospital. This particular story is my favorite so far in this series. Walt gets to meet up with Vic’s family and they are a delightful bunch and helpful too since a couple of them are on the police force. In the process of finding the guy who put Cady in the hospital, Walt is instrumental in uncovering a major crime ring. Craig Johnson’s characters continue to fascinate me with their broad range of personalities. George Guidall has once again delivered a fantastic narration. If you like your mysteries rugged than you can’t go wrong with this series.