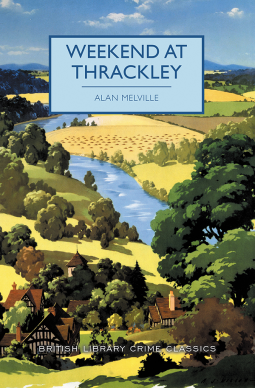 When Jim Henderson receives and invitation to a weekend party at Thrackley Manor in rural Surrey, he has no idea how it will change his life. Henderson finds himself as one of a party of six being hosted by the reclusive and mysterious Edwin Carson. Carson is known to be a jewel collector and everyone but Jim is dripping with them making Jim wonder why he was invited. Then he meets Carson’s daughter Mary and discovers that the chauffeur is really an undercover Scotland Yard man sent there to investigate Carson. Will Henderson and his friend be able uncover the truth, will the guests ever be allowed to leave the house, and does Mary like Jim as much as he likes her?

This book has been re-published as part of the British Library Crime Classics. Set in the 1930’s this is a charming little mystery. Jim Henderson is a handsome and appealing young man with a mind for details and an insatiable curiosity. Though not from a privileged background, he behaves like a perfect gentleman. Mary Carson is a bit of a mystery in the beginning but her courage is the key to unlocking this mystery. I thought the author did a great job of creating the atmosphere for this mystery. His descriptions take the reader right into the house and gardens and keeps you engaged. The story moved at a very comfortable pace and I had some difficulty putting this one down. This is a great example of the classic British crime novel.

2 thoughts on ““Weekend at Thrackley” by Alan Melville”