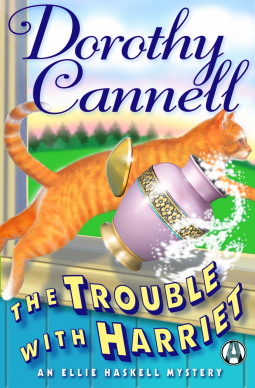 Ellie Haskell is back! She is quickly becoming my favorite cozy mystery heroine. And that handsome husband of hers, Mmm, Mmm. This story was delightful from beginning to end. Ellie and Ben are supposed to be off to France for a romantic getaway while the kids are with the grandparents. Then, just as they are about to leave, Ellie’s long-lost father shows up on their doorstep, with a broken heart and an urn. Seems he fell in love with Harriet while in Germany and then she died in a car accident. Meanwhile, the new vicar’s wife is putting on a play with Cousin Freddy as its star and objects are disappearing from the house. And who was the doom predicting gypsy?

As usual, the author has gathered up a quirky bunch of characters and the type of happenings that could only take place in an English village. The vicar’s wife is a force of nature but she has to be to keep up with her very absent-minded husband. Not only do we meet Ellie’s father but her kleptomaniac aunt as well. The storyline has something new for the reader on every page but she manages to flawlessly wrap it all up at the end. I highly recommend this book if you like to have some fun along with your mystery.

One thought on ““The Trouble With Harriet” by Dorothy Cannell”