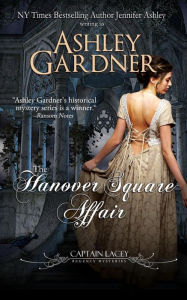 In need of a good swoon? Then check out Captain Lacey! He’s a former military captain whose wounds have left him with a limp and without a steady income. But it may be his emotional wounds that are the hardest to live with. While out one day, he happens on an uprising in Hanover Square. After intervening he finds himself investigating the disappearance of two young women. His investigation will involve everyone from prostitutes to the trendsetting Lord Grenville.

As you probably guessed I have a little crush on Captain Lacey. I found his complexity to be especially appealing. The author did a great job in developing his character. Lacey is not just a military hero but also very human. His episodes of melancholia brought a humanness to a character that might otherwise be just a stereotype. The storyline of this mystery is also top-notch with lots of twisty bits to keep you guessing. “The Hanover Square Affair” is a wonderful start to this series which is now up to 12 books. I hope to read more soon!

One thought on ““The Hanover Square Affair” by Ashley Gardner”