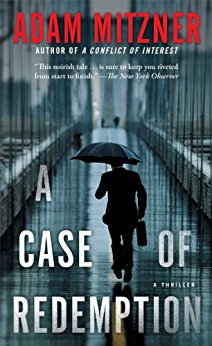 Dan Sorenson, NYC lawyer, has had a rough 18 months. He won a high-publicity case, his wife and daughter are killed in an auto accident, he quits his job with a prestigious firm, and then sinks himself into the bottle. Until he meets Nina. Nina has a high-profile case and she needs an experienced defense lawyer. The accused is Legally Dead, a rap artist, who is accused of killing his girlfriend Roxanne, another singing star. L.D. says he’s not guilty. After some persuasion, Dan agrees to take the case. He and Nina form their own firm and the battle lines are drawn. Together they have to sift through the lives of L.D. and Roxanne and build a defense. With a rising star ADA as the prosecutor and a camera hungry judge this trial is going to be a bumpy ride.

I was intrigued by Dan Sorenson from the first page. His story is tragic but I couldn’t help cheering him on. Nina is a beautiful young woman who just wants to pull him up out of his despair, while at the same time save a man she believes to be innocent from a life in prison. The dynamic between the two was very engaging. The courtroom drama was really well written and I liked how the author took the reader through Dan’s thought processes throughout the trial. He is constantly analyzing to determine his next move and how every word spoken will affect the jury’s opinion. I think this really helped me to feel a part of the action and kept the story moving forward at a good clip. This is the second book I’ve read from this author and it’s another winner for me.