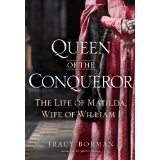 I had never heard of Matilda until I picked up this book and I am so glad I picked it up. Matilda was not only a wife to William the Conqueror but also it seems was quite literally “the wind beneath his wings”. She was a woman who provided her husband not only with 9 children but the kind of steadying influence which enabled him to successfully conquer and rule England and Normandy for many years. There is not much in the way of biographical details about Matilda’s everyday life in the historical records but the author has done an excellent job of piecing together the information that is available and mapping out the life of this queen whose descendants have held the throne for a thousand years.

Matilda and William had a very rocky start to their relationship as Matilda initially rejected him as a potential husband. His response was to go to her home and beat her till near death, after which she declared that she would have no other as a husband. In the early years they were the Duke and Duchess of Normandy and Matilda, who was very well educated for her time, brought to the court the cultural elements that William, trained as a warrior, was lacking. In addition she was a very pious woman and worked diligently throughout their marriage to keep William on the straight and narrow.

Their relationship was by all accounts one of great affection and William was criticized during his time for his faithfulness to his wife, something which was very uncommon at the time. William also came to greatly trust his wife’s judgment to such an extent that when he left Normandy to conquer England he left her completely in charge of his duchy. She apparently ruled quite well in his absence because this would continue to be his practice until the last few years of their marriage. Matilda would later be crowned Queen of England at William’s insistence and she would be the first woman to be recognized as a queen in more than name by the European world at that time. It was Matilda who was able to use her skills in diplomacy to soften the blow of the fierceness of William’s conquest.

Toward the end of her life there would be a war between William and his oldest son Robert which would drive a wedge between Matilda and William for the remainder of their years and undermine the trust William had placed in Matilda. Robert had always been Matilda’s favorite son and William’s least favorite. When William refused to give Robert his inheritance of the duchy Robert rebelled and tried to overthrow William. Matilda took the side of her oldest son. Nevertheless, when Matilda died a few years later William was completely overwhelmed by grief and continued to be for the next four years until his own death.

I was very impressed by the story of Matilda and the influence she was able to have at a period of history when women were thought to be good for little more than child-bearing. I also found this book very enjoyable to read which I attribute to the authors writing style. While the book is obviously very well researched and the story is well cited throughout the author also has a style which is very approachable. At no point did I feel like I was being drowned in a litany of facts as some biographies can turn into. I do enjoy reading the stories of the less obvious players in history and this one did not disappoint. I would recommend this book to anyone who is a lover of history or biographies.

I usually read mystery/crime books but I had found a free copy of “The Time Machine” a while back and decided to read it. I found it really enjoyable so I picked up this book when I came across it. I really like the creativity of the worlds that H.G. Wells writes about. It’s obvious why his books are considered classics of the sci-fi genre. I found the progression of the Martian invasion as depicted by Wells to be fascinating. Of course when he wrote the story we hadn’t even landed on the moon so to come up with the ideas of cylinders and octopus like creatures seems pretty amazing.

My bottom line on this book: everybody should read it.